Senegal's soil is paying the price for years of peanut monoculture. Unsustainable farming practices and climate change impact have left large tracts of land barren, but the RFS Senegal project is turning the tide on soil erosion and salinization.

When French colonialists introduced peanut plantations to Senegal in the 19th century, the West African country became one of the world's largest producers. By the 1960s, Senegal was responsible for nearly a quarter of all global peanut exports.

The decades that followed saw a steady decline. Today, even though 40 percent of Senegal's cultivated land is dedicated to the legume, the country produces only about one percent of globally traded peanuts.

Over 100 years, monoculture has severely impacted soil health. The encroachment of salt water into freshwater sources and decline of annual rainfall has led to a steady increase in soil salinity. And while some crops can grow in soil with a certain level of salt, high salt content makes crop production virtually impossible.

Many large tracts of arable land in the Groundnut Basin are now barren, leaving the 69 percent of the rural population that relies on rain-fed, small-scale agriculture extremely vulnerable.

With the aim of improving soil health and reinvigorating small-scale agriculture in the basin, the RFS Senegal project, the Agricultural Value Chains Resilience Support Project (PARFA), has embarked on a number of land restoration activities in the region.

Working with national institutions, local authorities, farmer organisations, NGOs (Wetland International Africa and Enda Energie), community-based organisations and community members, the RFS Senegal team has identified beneficiary sites and facilitated the adoption of a range of practices and technologies through interventions tailored to the region’s needs.

Land restoration practices and technologies include the installation of fascines, gabions and stone bunds. The fascines, or bundles of live woody stems, are planted in trenches and grow into clumps of erosion-fighting vegetation. Gabions are wire cages of rocks, that are often installed on slopes and control soil erosion by slowing the flow of water. Stone bunds are installed to act as a barrier that slows water runoff, allowing rainwater to seep into the soil and spread more evenly over the land. By slowing down water runoff, the stone bunds help build a layer of fine soil and manure particles, rich in nutrients. 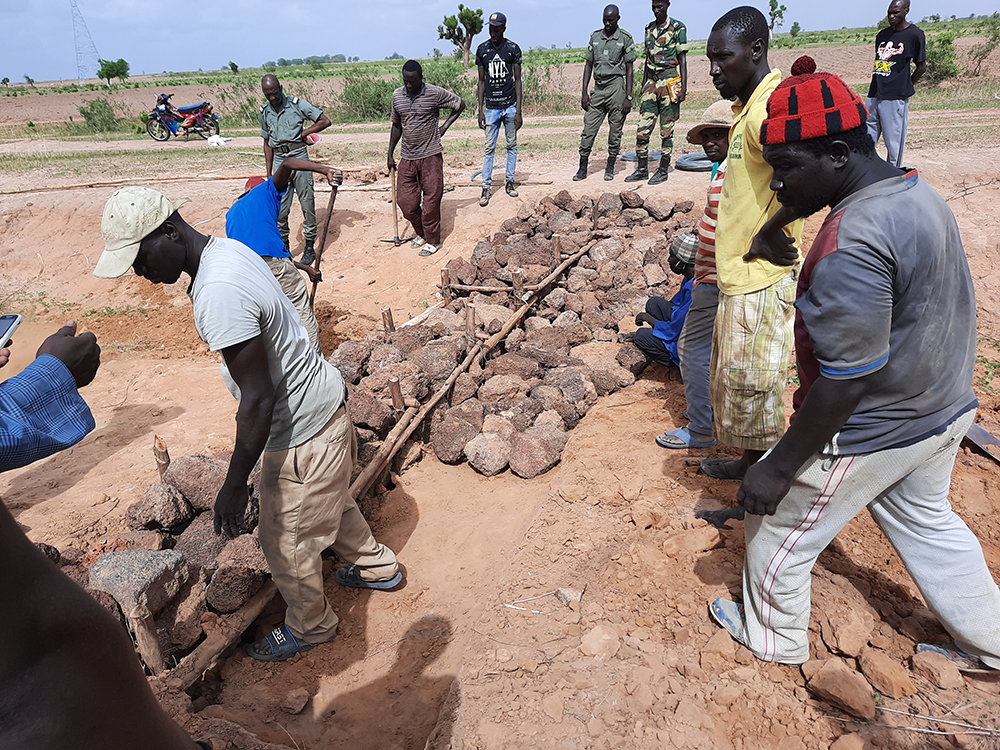 To combat salinity in the soil, phosphogypsum, a waste product from manufacturing fertiliser, has been used to help leach salt from the soil. The project has also initiated farmer capacity building in new composting techniques to improve the soil organic matter and assisted natural regeneration to improve vegetation cover.

To encourage the scaling up of successful restoration techniques, the country project team organised an exchange visit to a soil conservation site located outside the city of Kaolack. Producers from around the region were invited to see with their own eyes the impact of the agroecological methods promoted by the project. The visit made it possible to inform and train a large number of farmers in assisted natural regeneration and soil restoration and conservation techniques (the creation of gabions, stone bunds, etc.) at the same time. Feedback from the event suggests that the old Africa adage, “Better to see once than to hear a hundred times!” is true. The site visit catalysed a marked adoption of assisted natural regeneration techniques and a significant increase in the productivity of groundnuts and millet amongst the farmers who attended. 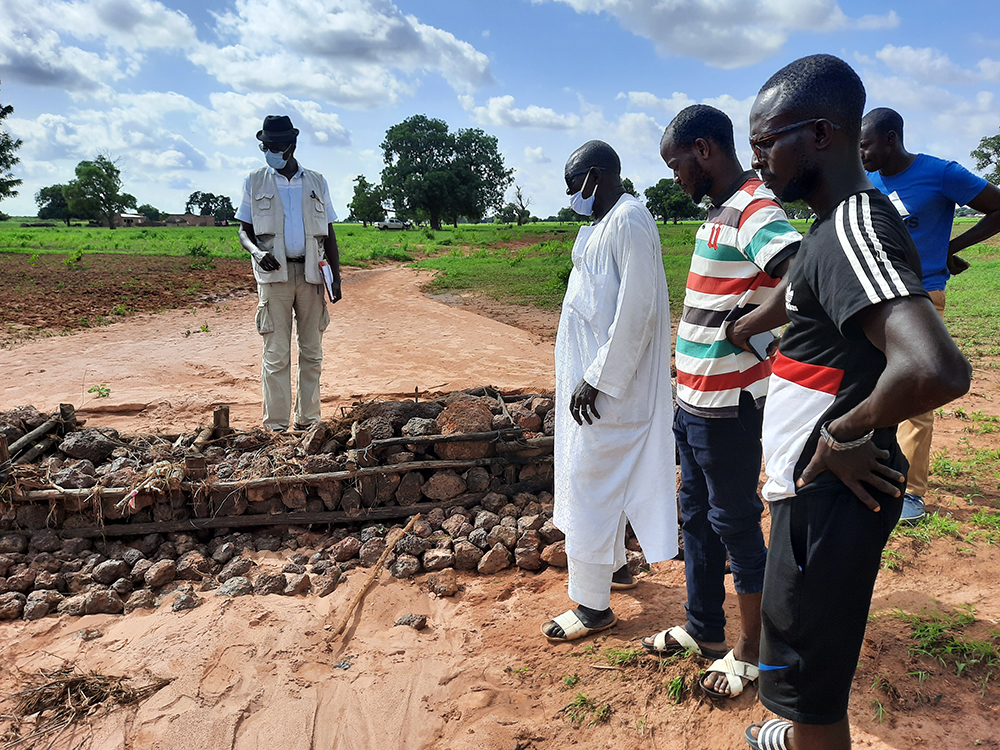 Mechanical interventions, like the stone bunds pictured above, are essential for curbing severe soil erosion in the Groundnut Basin. Photo taken by Matar Diaga Sarr.

Overall, the results of the soil restoration and conservation activities and have been encouraging. At least one hundred hectares of land have been recovered thanks to the simple and accessible technology put in place by the project. Yields have increased from 800 kg/ha to 1 tonnes/ha, or even 1.2 tonnes/ha in some areas.

By improving the health and productive capacity of natural resources within the Groundnut Basin, and scaling successful approaches across communities, the RFS Senegal project is increasing agricultural yields and building the climate resilience of smallholder food systems, enabling smallholder farmers to achieve food and nutritional security and improve their livelihoods.